Fancy a cup of coffee or tea and learning more about the researchers at Swansea university? Come join us at the Wallace coffee talks: an informal seminar series where students, staff and others related to Swansea university speak about their research or personal interests.

Ed Pope
Maze learning and memory in a decapod crustacean
Spatial learning is an ecologically important trait well studied in vertebrates and a few invertebrates yet poorly understood in crustaceans. Considering many decapod crustaceans play key roles in marine and freshwater ecosystems and live in complex, three-dimensional habitats, learning the location of, and routes to, resources should be an adaptive trait we can investigate in these animals using mazes. We investigated the ability of European shore crabs, Carcinus maenas, to learn a complex maze over four consecutive weeks using food as a motivator. Crabs showed steady improvement during this conditioning period in both the time taken to find the food and in the number of wrong turns taken. Crabs also clearly remembered the maze as when returned two weeks later but without any food, they all returned to the end of the maze in under eight minutes. Crabs that had not been conditioned to the maze (naïve animals) took far longer to reach the end and many did not venture to the end of the maze at all during the one-hour study period. This study provides an initial description of spatial learning in a benthic decapod. 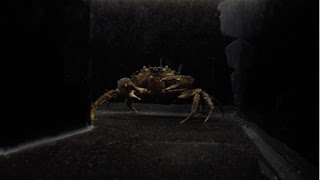 Welcome to BioTalks, the blog for our seminar and workshop series at the Department of Biosciences (Swansea University) and for the Biomaths Colloquia of our Centre for Biomathematics. We will post here mainly adverts about forthcoming events, generally held every Thursday @1pm for the Bioscience events, or on Fridays @3pm for the Biomaths events.

The views expressed in the posts and comments in this blog do not reflect Biosciences Swansea or any other third party mentioned or referred to on the blog. They should be understood as our personal opinions.

Comments
All readers are encouraged to leave comments, but we may act ('delete') on non courteous or off-topic ones. Same for spam and comments endorsing commercial products or services.

Contributors to this blog are fully responsible for everything that they submit in their comments, and all posted comments are in the public domain.

Privacy Statement
Any email addresses, names, or contact information received through this blog will not be shared or sold to anyone, unless required by law enforcement investigation.

Linking Statement
This blog may contain external links to other sites. We do not control or guarantee the accuracy, relevance, timeliness, or completeness of information on other web sites. Links to particular items in hypertext are not intended as endorsements of any views expressed, products or services offered on outside sites, or the organisations sponsoring those sites.

Acknowledgements
Thanks to the EcoEvo@TCD blog, whose 'Disclaimer' page we took as an example for the above text(http://www.ecoevoblog.com/about/legal-mumbo-jumbo/).